It has been a month since I was in Spain, but I have been too busy after I came home, to write anything down. But here it is! Not just one, but two EPIC RIDES to report about?

When I left Nerja back in March I said that I wanted to go back in the Summer. I wanted to try riding in the heat and experience the town with tourists. So, after the Nationals I bought flight tickets and off I went- just me and my Langma bike. 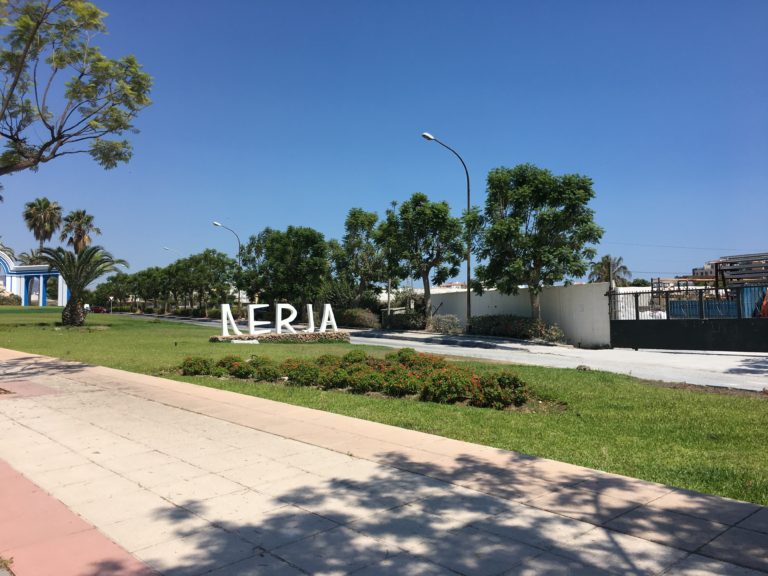 To get the most out of my trip I took a morning flight to Spain. Little did I think of the holiday season, so missing the first bus and waiting an hour to check-in, I had no time to get food before boarding and went straight to the plane as the monitor said “closing”.

I was up at 3:00, so I was very tired and fall asleep shortly after departure. When I woke up the food wagon had passed, and I had to settle with my snacks of nuts, dates and biscuits. Not the breakfast I imagined and not enough to keep me full until landing, but I had no choice. 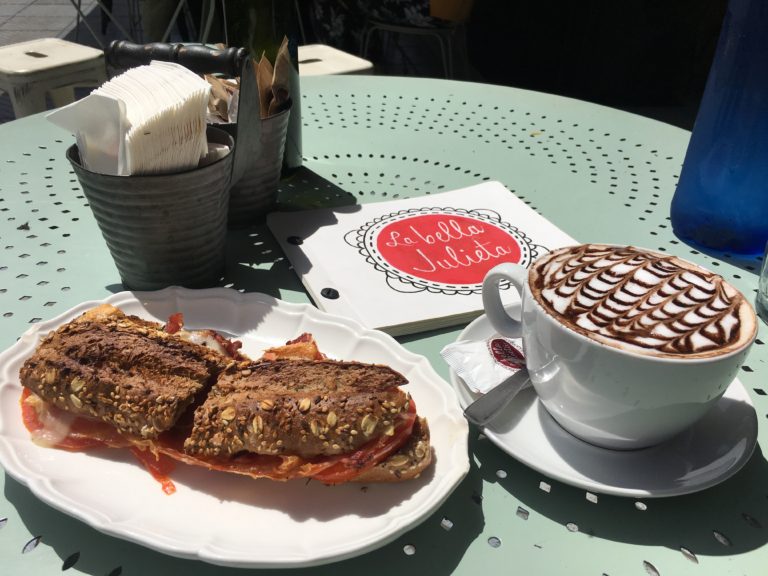 In the plane I fantasized about Starbucks coffee and other good stuff I would gladly pay too much for when arriving in Málaga Airport. But, fooled again, we were taken on a detour outside the transfer area and I could forget about coffee or anything else.

A shuttlebus was waiting for me, so again I had to go straight to the bus without time to buy anything outside the airport. 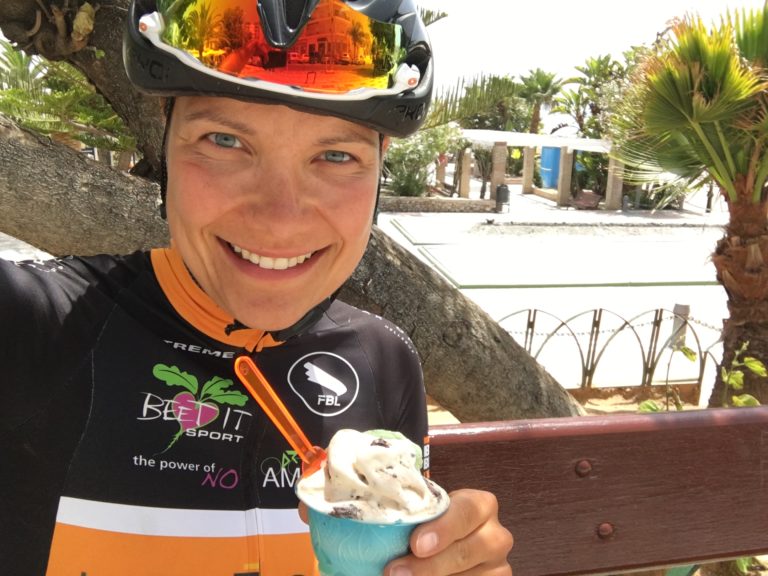 Had an ice cream on the first day. And on the rest of the days 🙂

Finally, I reached Nerja around 11:30 and I was dying of hunger, so before even thinking about going to my rental, I went to the nearest café and had a sandwich. People were watching a bit when I dragged my suitcase and bike case along to the table.

Because it was kind of a last-minute decision, and because of the high season, I couldn’t find a payable apartment, so I had booked a private room on Airbnb. I was a bit too early, but the women who owned the house of my room was kind enough to get her son to let me in. 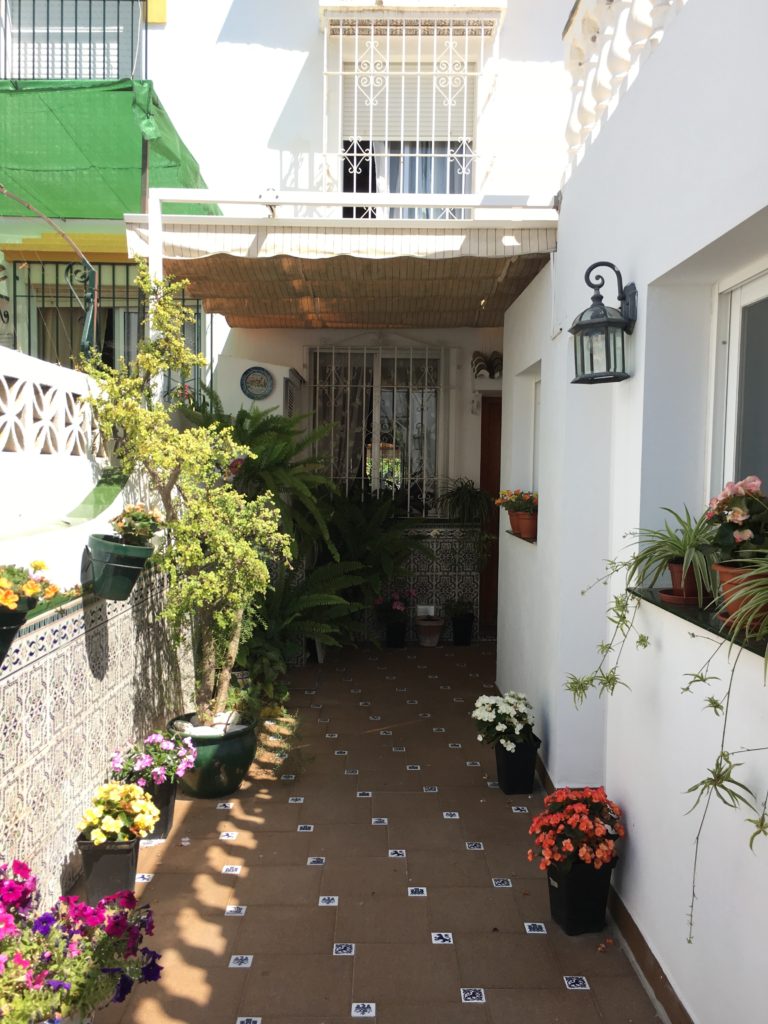 The house I lived in for two weeks

While I was waiting for him the neighbor, an old lady, came out to chat and offered me to put my luggage in her yard and sit on a chair of hers. She only spoke Spanish, so I didn’t understand everything, but I put my luggage in and went for something to drink. It was a hot day! That is something I love about the Spanish people. Their kindness and openness, always up for a chat and a helping hand, even to strangers.

May days were mostly breakfast, ride, lunch, tanning, Tour de France, ice cream, dinner, sleep and repeat. It was like being on a training camp on my own and I also did most of my rides alone. 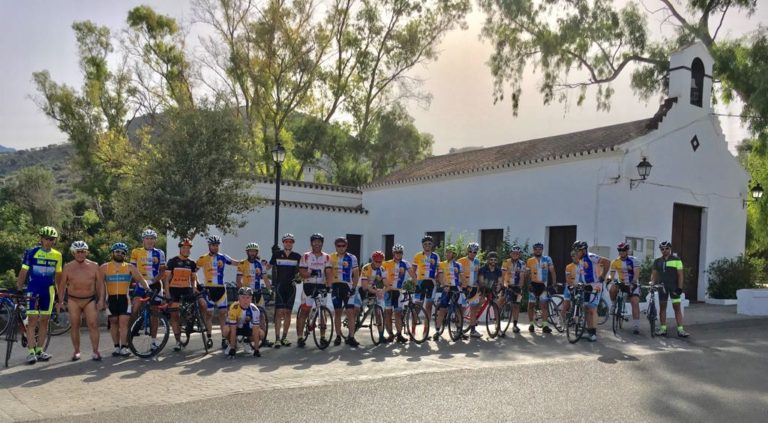 A big group of CC Narixa riders (do you spot someone different?)

But the weekend rides were reserved for the local club, CC Narixa, and I now have two more epic rides to put in my book of epic rides. It was very nice to see some familiar faces, and on the club’s Sunday ride there were a lot more people than in the winter. New and old faces, but I was still the only woman, so everything was as usual?

On the first Saturday, me and some of the Narixa guys took the car to Granada, because we wanted to go to Veleta. A mountain in Sierra Nevada being more than 3.000 meters above sea level. On top is a ski station, but it was closed.

The ride was 84 kilometers with 2.500 elevation meters. The route almost went up from the beginning and started with double digit percentages and I was thinking to myself “not again, I will die”, but it only took 2 kilometers and then the rest was eatable 6-8% average. But it lasted for more than 3 hours!

We had two stops on our way up. The last was at the ski station, were people normally park their cars and buy food/drinks. Now, without much snow left, people go there to walk or ride bikes.

From the last stop, we still had 12 kilometers to the top and now the landscape was pure open, and a strong wind was teasing us. At one point I had to take my foot to the ground and hold against a wind blow, so I didn’t fall. It was a bit scary, but I wanted to go to the top! 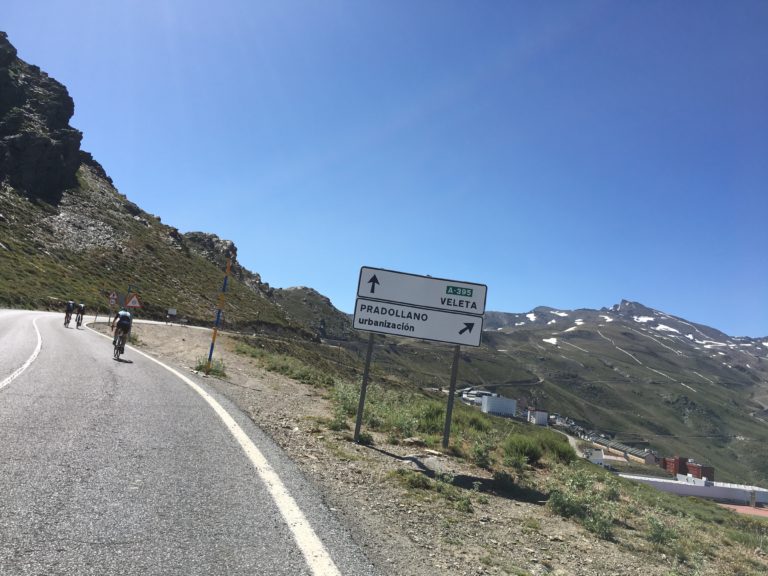 On the way to the top

The others had told me that the road was going to be really bad, but I thought “how bad can it be?” Ha-ha, bad, like really, really bad! Like, you need a mountain bike bad. The last 500-1.000 meters the road was turned into big holes and giant rocks and I was shifting between being afraid of a flat tire and crashing.

Towards the end the road just went into gravel, but big rocks gravel, until a gigantic rock blocked the way and we thought it was best to turn around. We had reached more than 3.000 altitude meters and the ski station lift.

After taking some pictures and touching the snow, I just wanted to get down as quickly as possible. I was freezing (it was 14 degrees on top and I was not wearing arm or leg warmers), also I didn’t like the wind or the bad “road”. 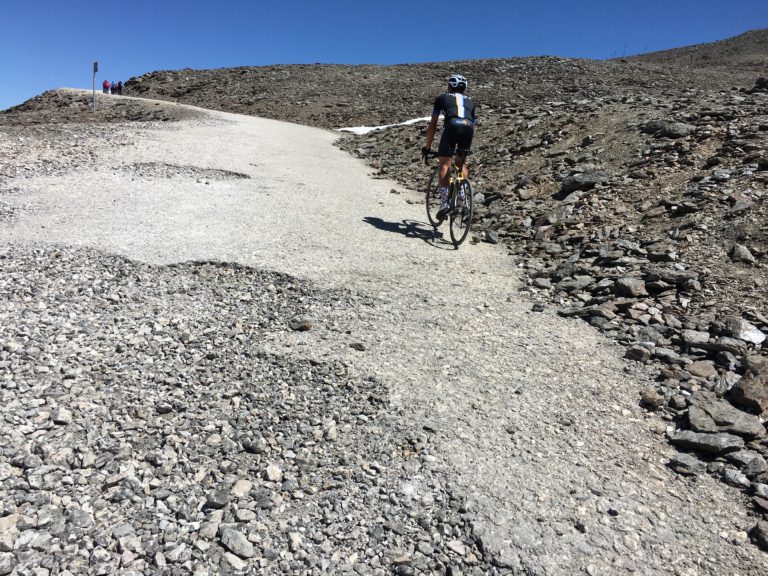 The road starting to turn bad

On my way down a professional from CCC was on his way up and while I took my foot out of the pedal to not crash on the rocks, he went faster than I could say “wow!” over the rocks like it was nothing (on his road bike!). Crazy type number 1.

Then, when I finally hit the normal road again, I was being very careful because of the wind. I met a Bora-Hansgrohe rider going up and shortly after, I sensed someone behind me. I thought it was one of my Narixa guys, so I looked back and starred right into the Bora-Hansgrohe riders face. I didn’t have enough time to recognize who it was because, in a glimpse of an eye he passed me, and despite his high-profile wheels he didn’t care about the wind at all. I could see his bike being slammed from side to side because of wind blows, but he just continued. Crazy person number 2. I saw him again at the parking lot, so he had everything under control. It was just me being a chicken, I guess ?? 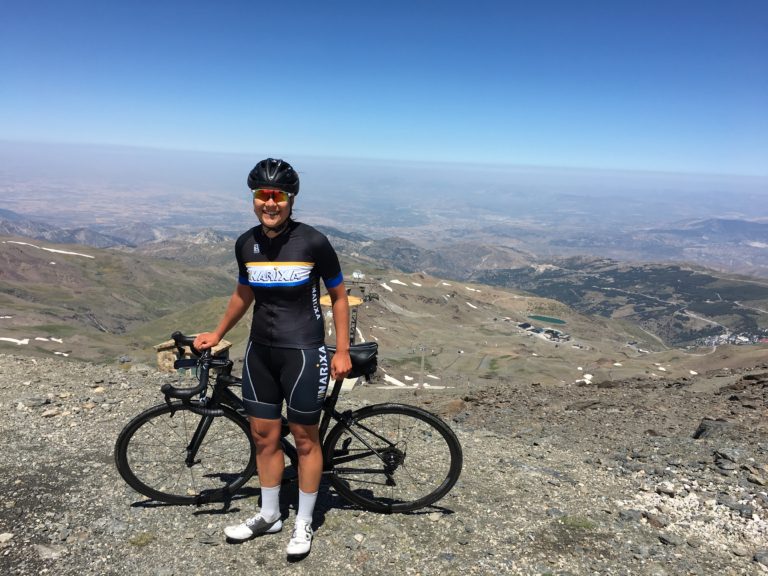 On top of Veleta

We had a coffee stop after the ride, before taking the car back to Nerja, and as always, I need to eat after a ride (everyone does). A recovery meal of protein AND carbs (something I think a lot of people, talking about recovery meals and proteins, forgets to mention, but proteins are better absorbed combined with carbs – and you also need the carbs).

I ordered a sandwich and got a GIANT one. The guys were laughing at me, and talking long about not eating anything themselves, but when tapas was served at the table (it is normal to get free tapas with your drink in Spanish bars) they ate it all, ha-ha. But I am used to having comments on the amount I consume on and off the bike, so I don’t care. And hey, I don’t look this good by not eating ??

The second Saturday, we were heading towards Trevélez and this time on the bike from Nerja, which made it a ride of more than 200 kilometers and 3.000 elevation meters. 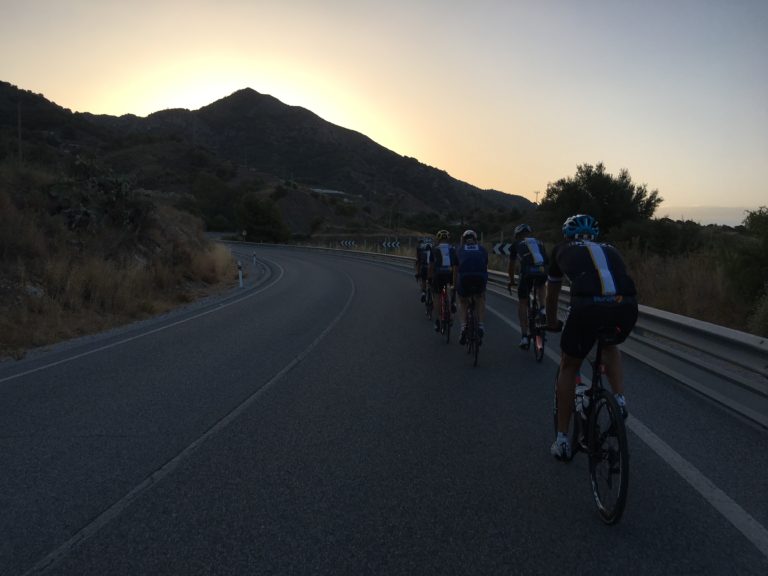 We started early at 7:15 on a beautiful morning. Me and a handful of Narixa guys. The first 40-50 kilometers were very familiar. The coastline to Salobreña and then into the mountains. I was saving energy for the climb which was up and down for around 30 kilometers. Not knowing the climb made me stay in zone 3 to be sure not to blow up, but when we reached the top I felt a bit too fresh. The climbing was long, but not steep and very beautiful and HOT!

We had to stop several times to fill our bottles and thank God for all the fountains (or maybe just the nature/people who put them there). At one water stop Carlos wanted me to taste the water while he was looking. I thought it was a bit weird, but I did and I almost spitted it out again. He was laughing! The water was sparkling and tasted a bit like a fart because it was ionized somehow. Very weird and I didn’t like it. 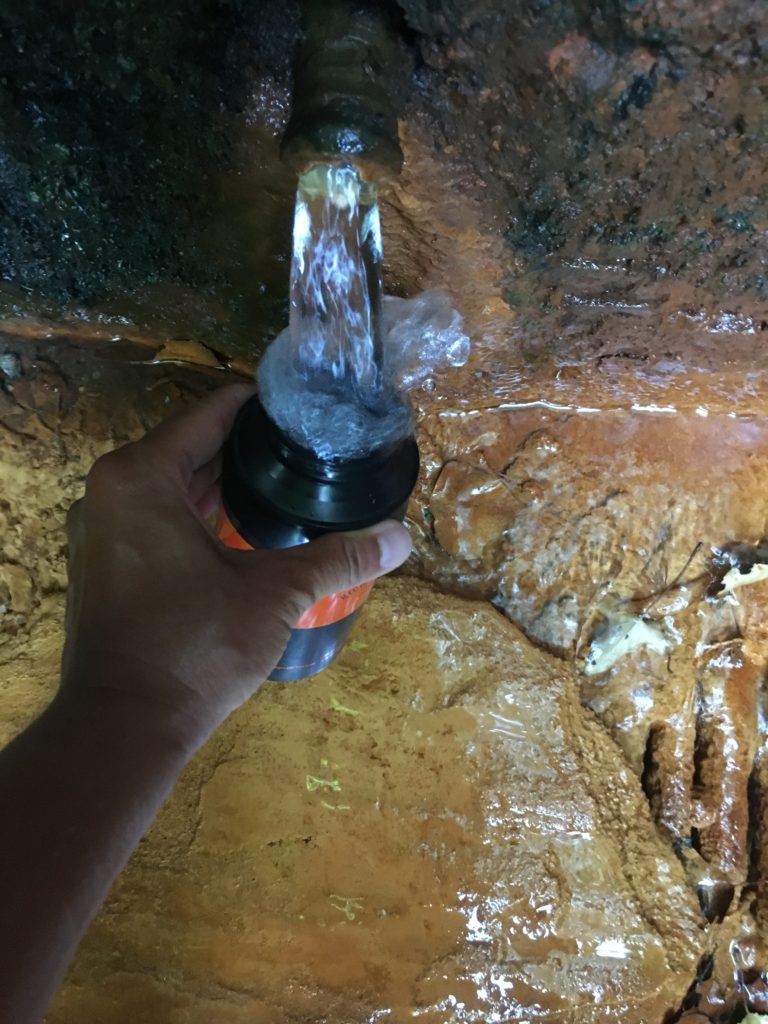 Fuente Agria with the weird water

The level in our group was very different, so while waiting for the others, we sought shadow under umbrellas belonging to a few stalls. They were selling dried fruits and other good stuff and we were offered to taste, so I had figs, honey-roasted sesame seeds and almonds. Yummy!

When we reached the top of the climb and the small town, Trevélez, it was 40 degrees and time for lunch. This time we all had a big sandwich and loads of Coca-Colas! No one was talking about not eating and for once I think I ate the least. Mostly because I had been eating throughout the ride, so I didn’t need that much extra, and because I don’t like to ride with my stomach too full. 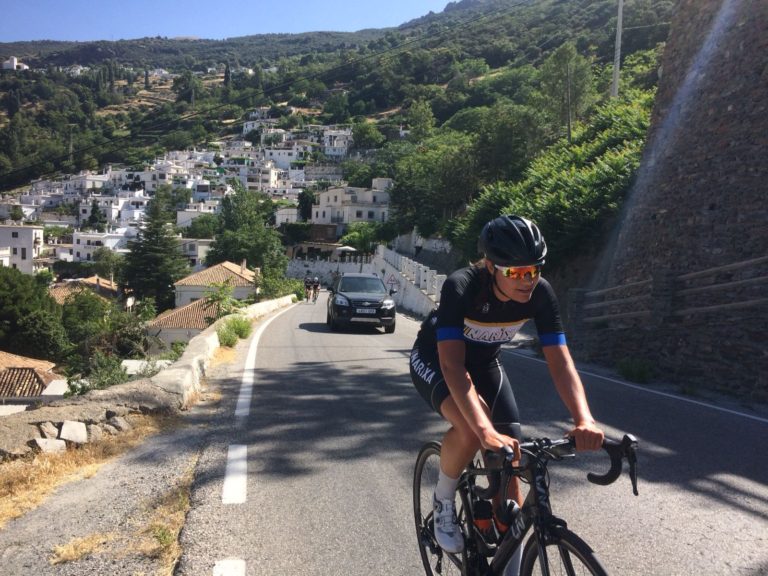 The downhill took about an hour and my bottle were full at the beginning. But the warm weather, a 40 degrees wind in the face, and probably too much salt in the jamón sandwich, made me drink both bottles before reaching the bottom and I was still very thirsty!

There was no fountain or gas station or anywhere to get drinks before reaching the main road, so I was a critical point getting more and more dry in my mouth. My lips were so dry that they glued together, and I could only think of getting fast to liquid.

When we finally stopped at a gas station I bought 1,5 liters of water, a can of coke and an Aquarius. I filled my bottles (1 liter) and drank the rest (1,33 liters) before getting back on the bike. After that I was flying, and we went full gas for the last 40-50 kilometers home. 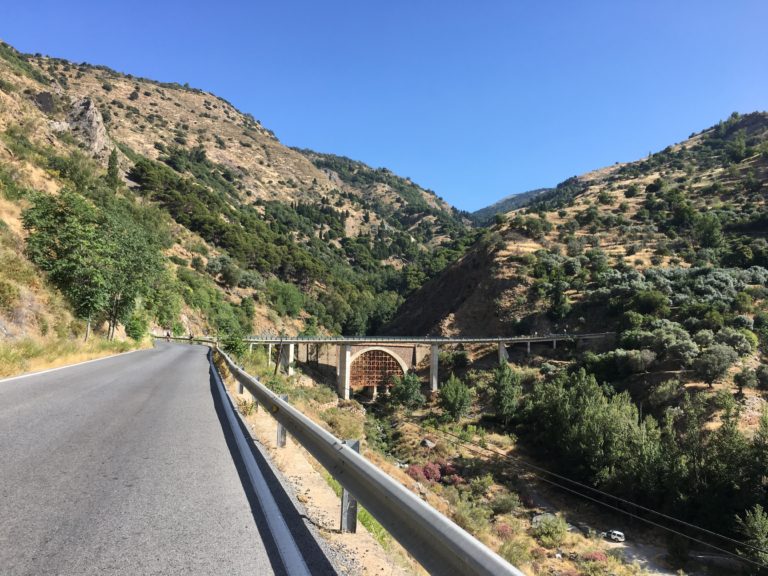 Beautiful sights on the Trevélez ride.

Maybe a bit too fast, because we ended up being only three passing the Nerja sign together, but it was good for me to use all my saved energy from the climb.

I really enjoyed being back, riding with friends, seeing new places and recharge the batteries for the last part of the season. I hope to be back soon, but right now my focus is on racing.