A hot day in Herning

Last weekend the Danish 70.3 Championship Garmin Challenge Herning took place and it was quite a beauty of race. Unfortunately, it was also a lot of (self-inflicted) suffering for myself.

The Challenge Denmark middle distance triathlon race takes place every year in the month of June in Herning. It consists of a 1,9 K swim, 90 K bike ride and finally a 21,2 K run. This year, the weather was hot and moist; a tough combination for most triathletes. The race was won by the German pro-athlete Andreas Dreitz in the superb time of 3:47:12, which included a bike pace of 43,96 km/h. For me, it was a different story.

Me and my friend Dennis arrived at the hotel in Herning the evening before the race, just in time for race registration. It was my first time in Herning (coming from Copenhagen, I’ve only been to Jutland a handful of times).

I saw a lot of nervous and focused athletes at the hotel. After the registration, we went to the official pasta ‘party’. They used that word, but it was just a free pasta salad at a select few restaurants around the town. After eating a big load of pasta we went back to the hotel to prepare for race day.

Race day morning started off well. Race start was around 12 o’clock, so we had a lot of time at the breakfast buffet. It’s always interesting to see the faces of fellow triathletes on race day morning. Who looks shaky? Who looks calm and ready? We spotted a lot of the pro-field, looking absolutely lean and ready to fire on all cylinders.

After breakfast, we got back to the room to pack everything up. We only stayed one night, so we had to do the checkout before going to the swim-start at Lake Fuglsang. The lake was somewhat near the hotel (4-5 km) so we hopped on our bikes and went for the bike check-in (a good final test to see if everything is a-okay on the bike).

Unfortunately, something went wrong with either me, google maps or my phone. All of the sudden, we were in Lind – a neighbouring town south of Herning, the opposite direction of Lake Fuglsang. So now we only had 30 minutes to get to the bike-check and prepare. A wonderful opportunity to get in some intense interval-training!? Anyway… We arrived 5 minutes before the deadline, which was a huge relief.

After the check-in, we had 1,5 hours to kill. Thank goodness! We could finally relax after stressing to get here in time. The Danish Sprint Triathlon Series took place during this time, so we got to see some super fast triathletes battling it out.

My friend Dennis, who participated in the pro-field, got the message that the water was too hot for wetsuits. For Age-Groupers the limit is 24c, while the temperature limit is only 21c for the elites. So that seemed to stress him out a bit.

The pro men and women started about 20 minutes before I did, so I also got to see them go at it. The pro swim-start is always super intense due to the fighting for positions in the water. This always gets me going right up until the last moments before my start.

The swim start for us mere mortals was a rolling start of 6-10 people at a time. We then had to swim 1,9 kilometers around Lake Fuglsang. The swim was quite smooth, even though I didn’t feel that energetic. At one time, I did get kicked in the gut by a breast-swimmer – but that happens. You just move on. I got out of the water after about 34 minutes of swimming and it was then straight up to the transition. Transitions can be quite the tricky part of triathlons because it’s often the most neglected part of training. Thankfully I didn’t fumble around too much and getting my wetsuit off was quick and easy. It was then just a job of finding my bike and sprint out to the bike mount-line.

Fumbling with the zipper out of the water

The bike consisted of a 90 kilometer round-about course in the flat terrain the Danish moor. A quite beautiful terrain, but I didn’t really get to take it in that much, since I was really focused on my bike performance. See, I had a plan. The bike part of a triathlon is crucial – you need to get it just right with pacing, nutrition and hydration. I always use a specific program to analyse the race course and then feed me the right power targets based on my FTP and how hard I want to push it. So the entire course is mapped on my cycling computer with power targets instead of GPS directions and then I just have to stick to those power targets. 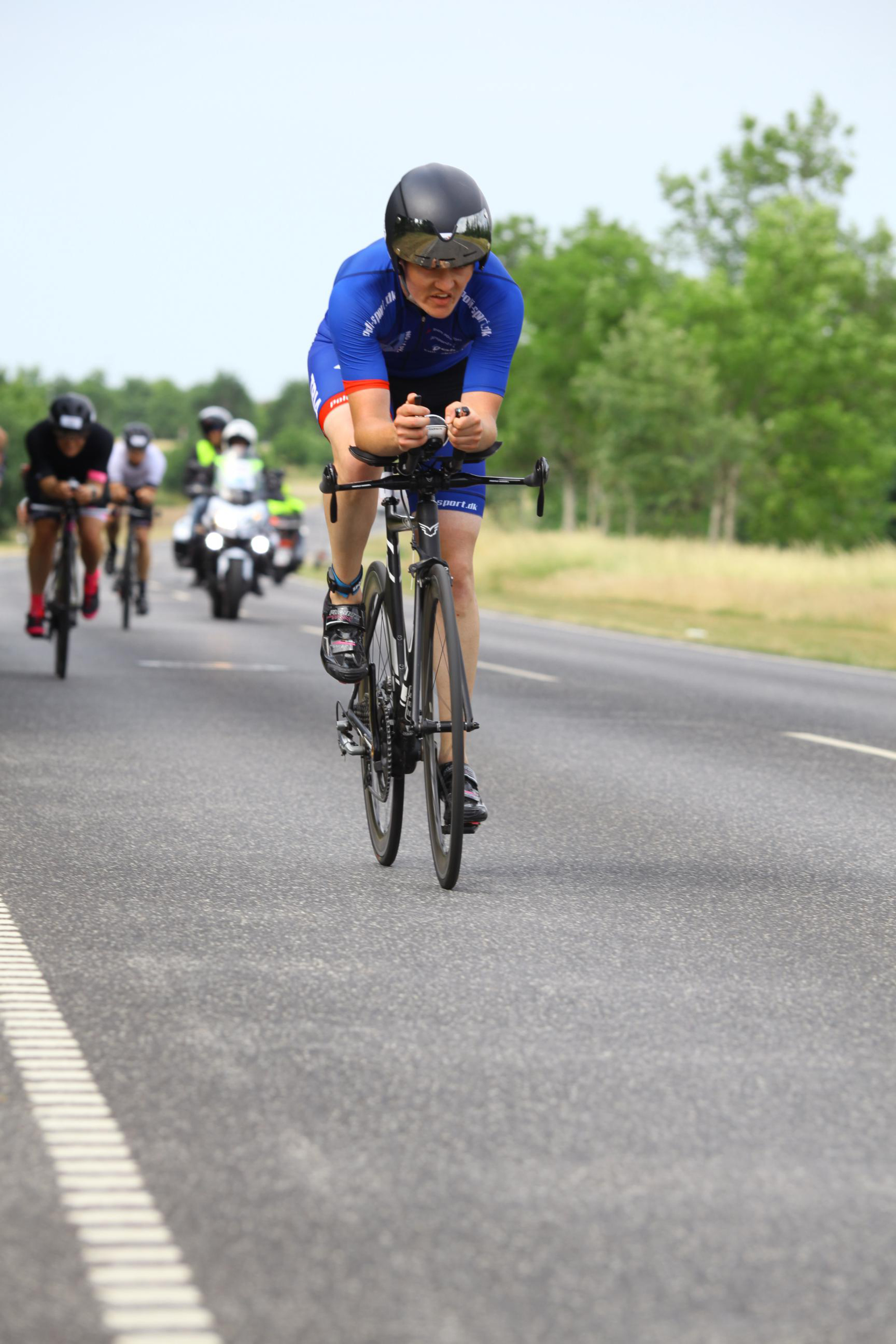 My performance on the bike was decent despite back and neck pains (2:39)

For the first 60-70 kilometers everything was fine, but then my back and neck started to ache. You see, I did the ABSOLUTE NO-NO and adjusted the position of my tri-bars a couple of weeks leading up to the race (what an idiot). I wanted a more aerodynamic position, which turned out to be a big mistake. I couldn’t stay in the tri-bars for more than a minute at a time on the last 20K and my bike plan was tarnished. I lost at least 10 minutes because of it and I took the back and neck pain with me on the run.

I finally reached Transition 2 and I was off the bike. I quickly got rid of my helmet and then got my socks on, the shoes on, my headband on and finally the obligatory race number belt before leaving for the run course. The run course consisted of 4-rounds in and around downtown Herning. There was a lot of cheery people on the streets and that part of the race is at least always fun.

I hoped that I was gonna be able to shake the back pain after a couple of kilometers, but that never happened. I saw that my running pace slowly but surely decreased over time, but I kept on. The sooner I got to the finish line, the sooner the pain would stop. But there’s always someone who suffers more than you. And I saw a lot of suffering out there. Dealing with the heat during a race is often a big struggle. Watching people vomit on the run course is always a sight to behold. Fortunately for me, I didn’t deal with any gastrointestinal disturbances other than the usual bloating that a triathlete experiences, when they transition from the bike to the run. 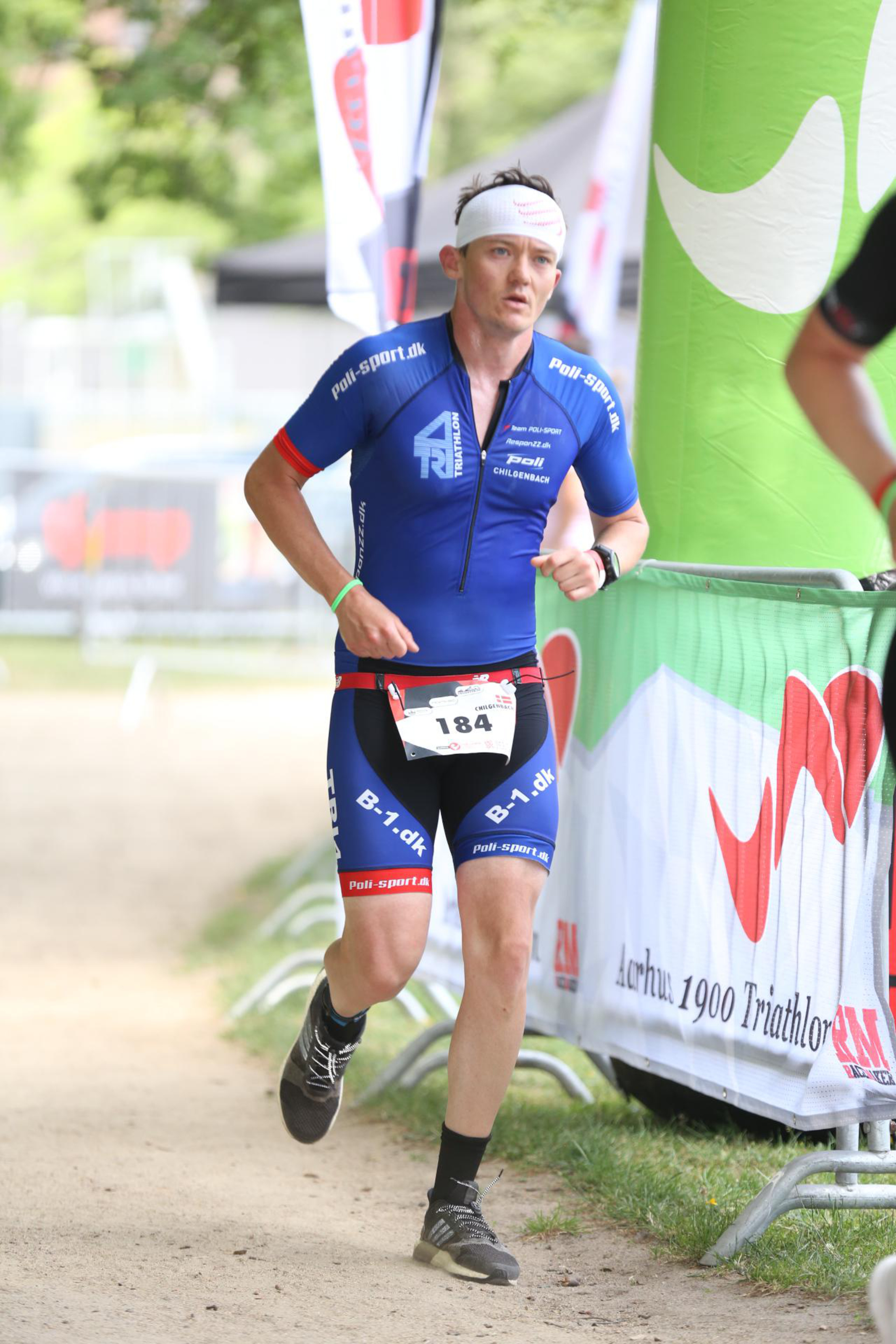 Unfortunately, I didn’t get to smile too much on the run

Finishing the run can feel like an eternity when you are unable to reach your goal. I did not reach my goal of finishing the race (1,9K swim, 90K bike and 21,2K run) in less than 5 hours. I finished in 5:07:01. But after some time of reflection, that was still okay. It was a beautiful day in Herning with lots of happy people. Being able to do triathlons is a privilege. It was a good day. 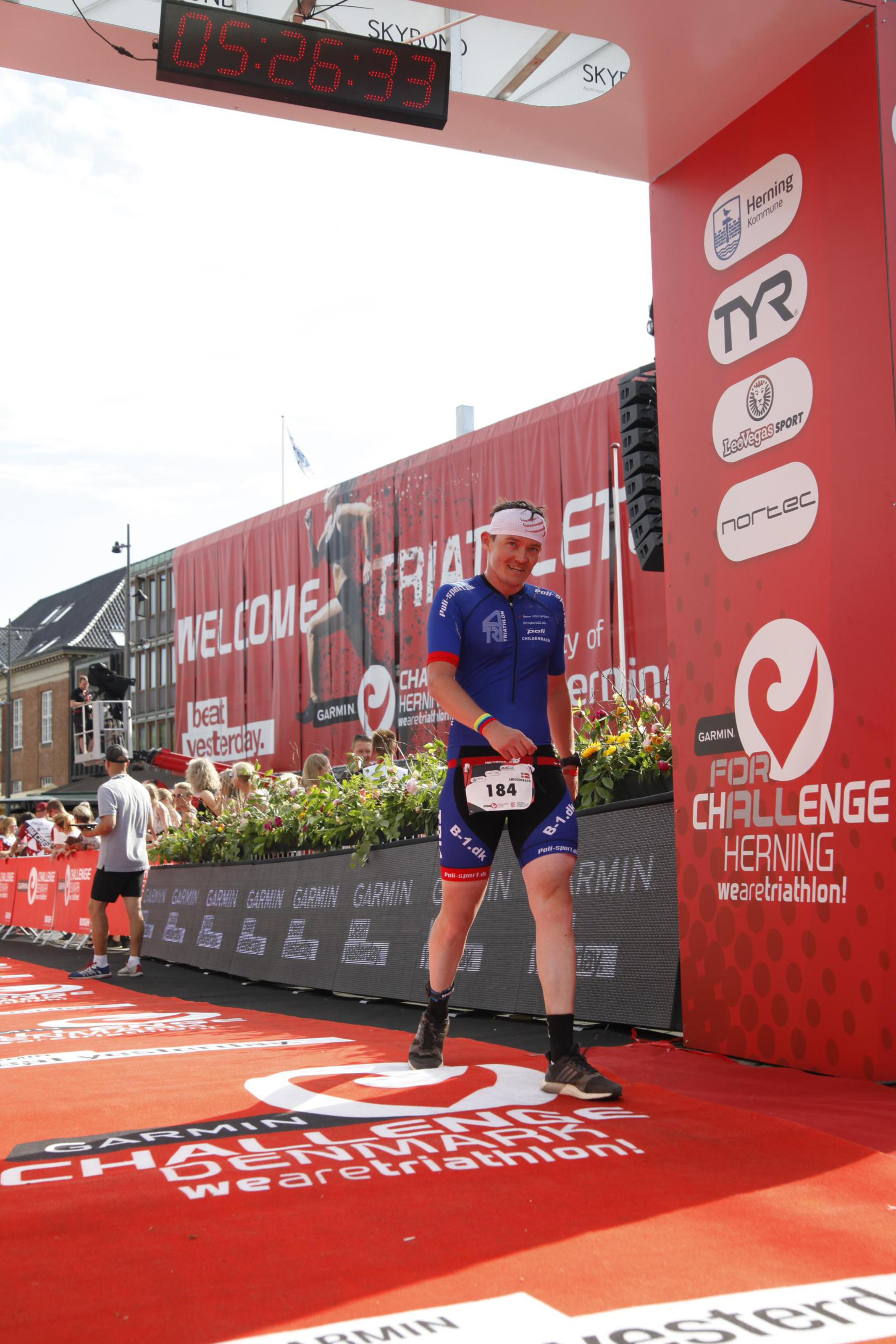 And I WILL have another shot at sub5.. very soon…